The GOAT: the Greatest Of All Time. That's really all that needs to be said about Carmichael. In 1996, he concluded a record-setting run in the amateur ranks by capturing his ninth AMA Amateur National Championship at the prestigious Loretta Lynn's Dude Ranch. He accumulated a total of 67 amateur motocross national championships. He got his first taste of professional motocross in 1996, showing signs of his upcoming greatness, and earned the AMA Motocross Rookie of the Year award. He didn't slow down in 1997, earning a few Eastern Region 125cc Supercross race wins, as well as dominating the 125cc National Motocross Championship Series aboard his Pro Circuit Kawasaki, capturing his first professional championship. 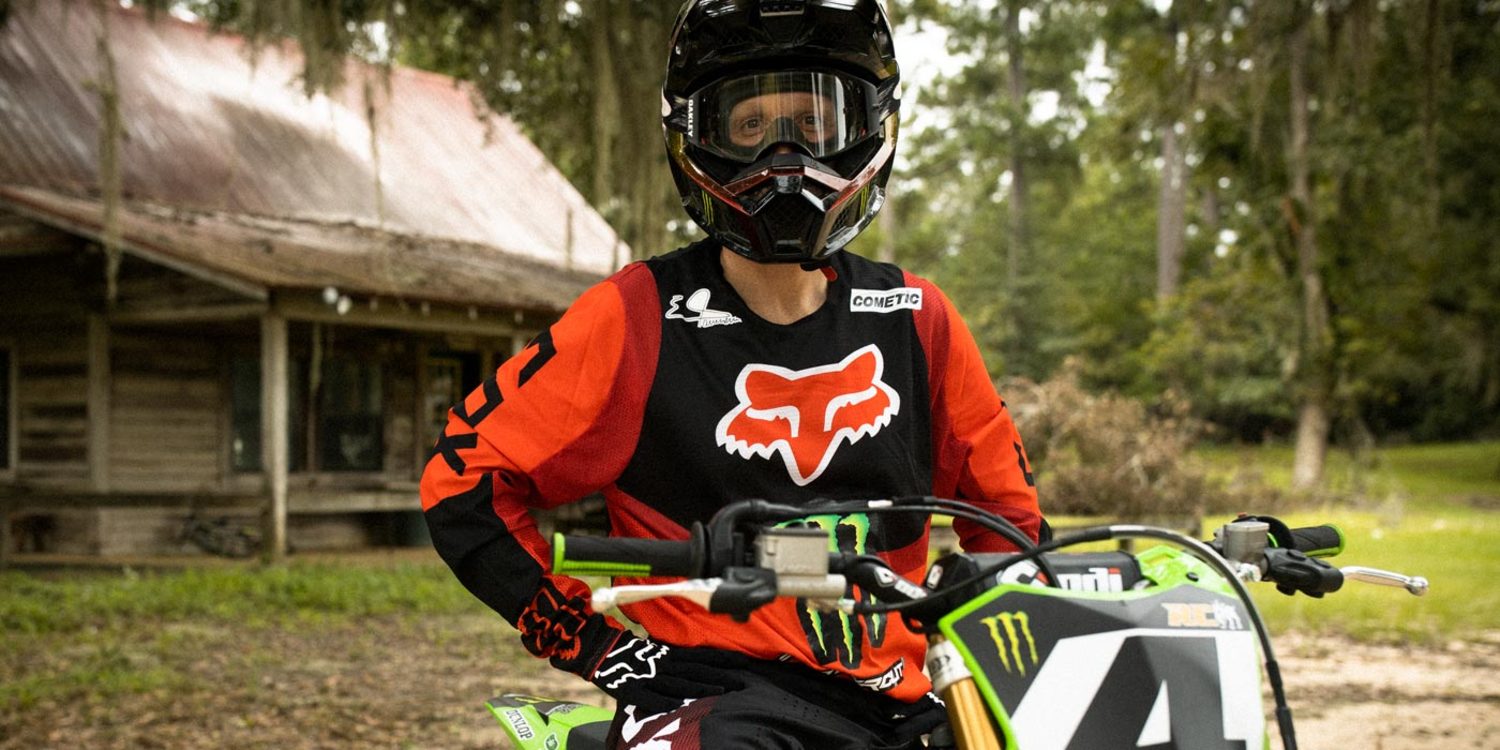 Carmichael rode a 250cc machine for the entirety of the 2000 season. He earned his first 250cc Supercross win at Daytona and had an additional five podium finishes. Always a stronger outdoor rider, Carmichael immediately dominated the AMA 250cc U.S. Motocross Championship, winning nine overalls and easily winning the series championship. He was a key part of the Motocross des Nations team, bringing the title back to the U.S. alongside teammates Ryan Hughes and Travis Pastrana. Carmichael only added to his stellar career in 2001. After adding a new trainer to his program, he was able to dethrone Jeremy McGrath as the AMA 250cc Supercross Champion, and once again captured the 250cc Motocross Championship aboard his Team Chevy Trucks Kawasaki. 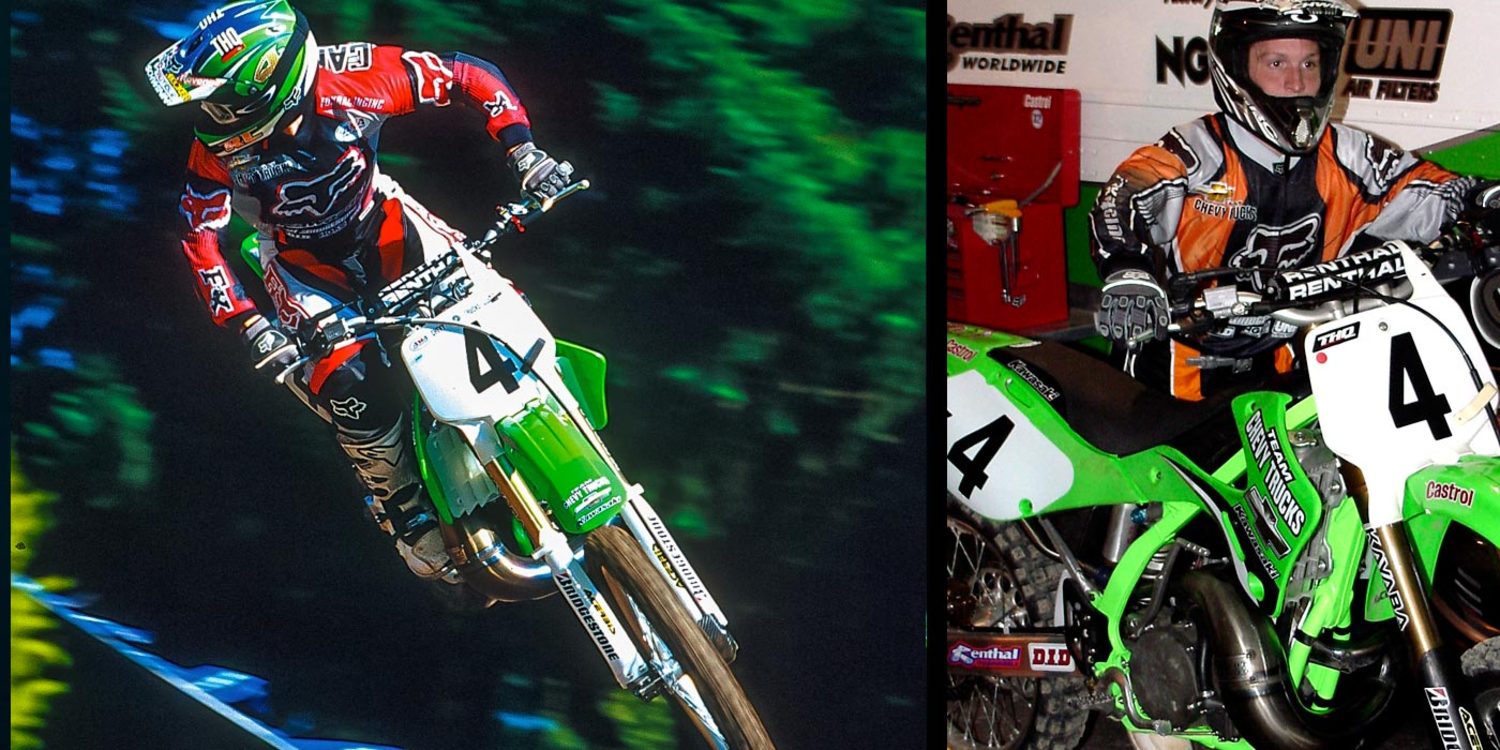 In 2002, Carmichael switched to Team Honda before dominating the AMA Supercross Championship, and set a record that can never be broken in AMA 250cc National Motocross racing: he won every moto he entered that season, going 24 for 24, and earning the first perfect season in U.S. motocross history. The 2003 season saw Carmichael once again win both the AMA Supercross championship as well as the AMA National Motocross championship. In his final season aboard a Factory American Honda in 2004, Carmichael matched his perfect season in the AMA Motocross National series, once again winning all 24 motos of the season, but this time on a four-stroke CRF450R, instead of the two-stroke CR250R two years previous.

Carmichael made the switch to the Factory Makita Suzuki team for the 2005 season. He once again controlled every series that season, winning both the AMA Supercross and Motocross championships, along with the U.S. Open of Supercross and the Motocross des Nations. The 2006 season marked Carmichael's last full year of motocross racing before stepping into semi, and then full, retirement. He once again won the AMA Supercross and Motocross championships, and again captained Team USA to another Motocross des Nations victory. The AMA recognized his achievements by naming him the Athlete of the Year for a record fifth time.

Carmichael went into semi-retirement in 2007, but was arguably still the fastest rider on the track in the races he entered, including winning all six overalls in the six AMA Motocross Championship races he entered. Those six wins brought his combined SX/MX career win total to a record 150. He bid farewell to professional motocross racing by leading Team USA to another Motocross des Nations victory in Budds Creek, Maryland and winning the final race he entered.

Carmichael, who had achieved all there was to accomplish on two wheels, looked to four wheels for his newest challenge. He became interested in NASCAR through a family friend and Cup Driver Clint Bowyer. "I met Clint through his brother who raced motorcycles," explained Carmichael. "His brother was really good. I was a couple of years younger than his older brother and around the same age as Clint. We went to a race a long time ago and ended up parking next to them and became friends. He used to race motocross and got to be 15 and said ‘Man, I am going to try racing cars'. I just watched him work his way up through the ranks." But Carmichael's interest in auto racing didn't come to fruition until his semi-retirement from Motocross at the conclusion of the 2006 season.

In 2007, while still racing a partial Motocross schedule with Team Makita Suzuki, Carmichael signed a contract to drive for Ginn Racing, who later merged with DEI. Mark Martin, who was also a Ginn Racing driver, took Carmichael under his wing and mentored him in a Super Late Model at tracks throughout Florida and the Southeast. 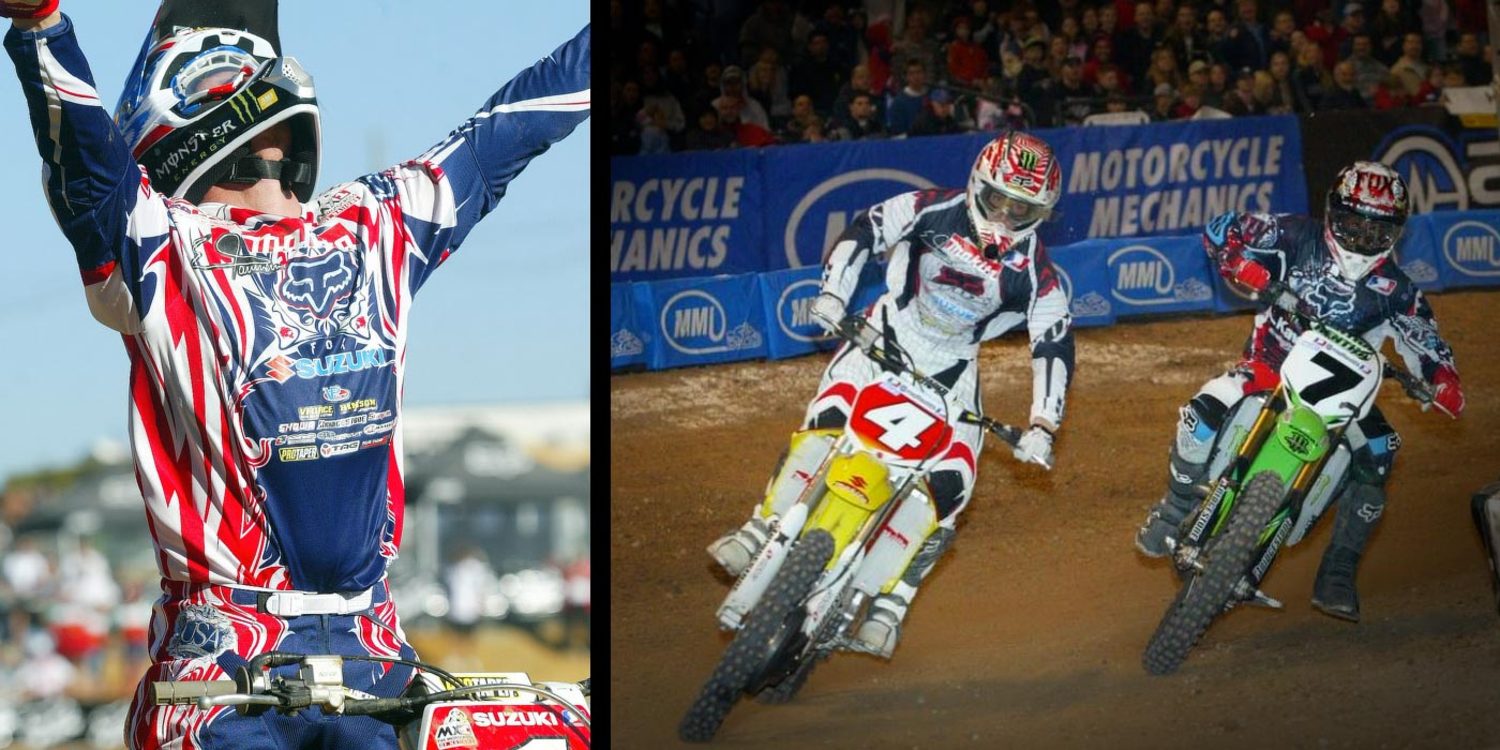 The 2008 season seemed to be in limbo when negotiations with DEI didn't pan out for a full schedule in the NASCAR Camping World Series East – the next logical step in his progression to NASCAR's bigger stage. In February – just two months shy of the NCWS season opener – Carmichael met Ken Schrader and the two hit it off. By the end of the month, Carmichael signed on with Schrader Racing and got Monster Energy Drink to sponsor his efforts for a full campaign in the development series. After Finishing 6th in the series and being voted the Most Popular Driver, Ricky went on to sign a deal with KHI to compete in the 2009 Camping World Truck Series. Ricky also competed in a one-race deal for KHI at Talladega in 2008 (ARCA).

In 2009 Ricky contended for the NCWTS Rookie of the year and although he only competed in 18 of the 25 races he was able to finish 4th in the rookie standings and 22nd in the drivers' standings with 2 top-ten finishes. To cap off a strong showing in his first attempt at one of NASCAR's big 3 series, Ricky brought home the Most Popular Driver award. The award is a strong testament to his loyal fan base and growing popularity as a NASCAR driver. For the last 2 races of the 2009 season, Ricky made the switch to Turner Motorsports, signing a multi-year deal with the new team owned by Steve Turner.

2010 started out strong with the new Turner Motorsports team. Monster Energy continued to support Ricky and his dream to become a NASCAR Champion. In addition to his strong showing in the Truck series Ricky has been able to show his talents in the car by competing in four Nationwide series and 3 ARCA series races. At the conclusion of the 2010 season, Carmichael ended up 13th in the Truck standings with 3 top 5's and 9 top 10 finishes. 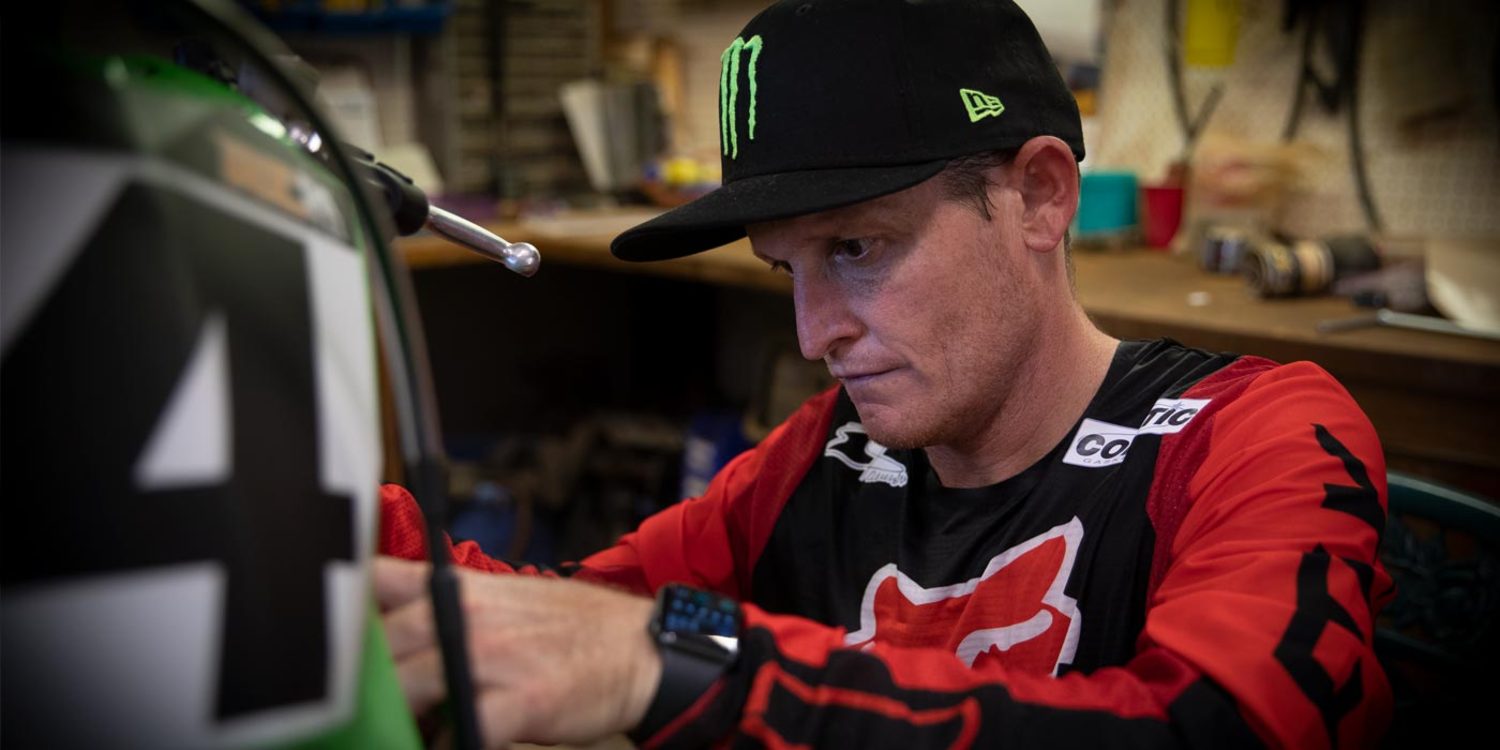 At the conclusion of his car racing career, Ricky took what he had learned from his NASCAR mentor Kevin Harvick and looked to become a team owner in the sport of Motocross. Teaming up with Freestyle legend Carey Hart they formed RCH in 2012 and went to work establishing themselves as one of the premier teams in the paddock and winning the 2016 Motocross Championship with Ken Roczen. That made Ricky the first ever in the sport of Motocross to win a Championship as a rider and owner.

Currently, Carmichael can be found in the TV booth as an analyst for NBC Monster Energy Supercross. Carmichael continues to be a mainstay on the two-wheel scene and is widely respected for his support of amateur racing and most notably for the event that bears his name, the Ricky Carmichael Daytona Amateur Supercross held annually at the Daytona International Speedway. Ricky also invests his time and energy in giving back to the sport of motocross with the Ricky Carmichael University. Since 2010 the RCU has been held in 8 countries around the world and has helped train thousands of riders to be better, safer riders. Ricky continues to be a worldwide ambassador for the sport and his long-time sponsors. 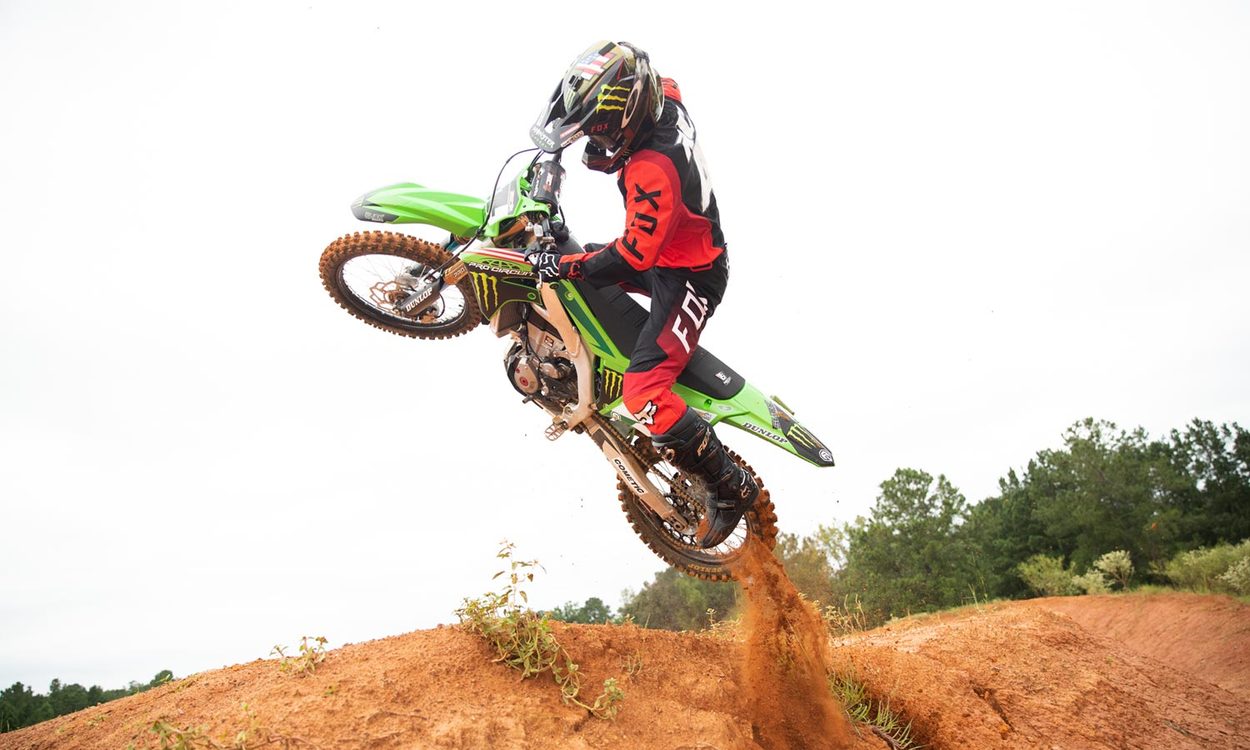 Sign Up with Cometic Gasket and get exclusive updates on our latest product releases and industry news.

No thanks, I don't want to sign up with Cometic Gasket.